2021 GIMAV ASSEMBLY: 2020 INDUSTRY DATA PRESENTED ALONG WITH 2021 FORECASTS. BOARD OF ARBITRATORS AND SOLE AUDITOR ELECTED.

Data presented at the meeting reflected the impact of the COVID-19 pandemic on performance of the glass processing industry which, however, has managed to bounce back; getting 2021 off to a good start raises hopes for at least a partial recovery. During the meeting, the Board of Arbitrators and Sole Auditor were appointed for the 2021 - 2025 term.

Production down 16.6% due to a drop in exports (-14.9%) and in domestic sales (-20.7%). This is how the pandemic negatively affected the performance of Italy’s Industry of Manufacturers of Glass Processing Machinery and Technologies that closed 2020 with overall sales of 2,027 million Euro. Imports also fell (-11.1%), causing the domestic market to shrink (-17.2%). There was an overall drop in trade (-14.2%) as well as in the trade balance (-16.1%) which, however, remained very positive at nearly 1,080 million Euro.

If 2020 was the year of global economic crisis, Italy’s glass industry companies fought back with extraordinary buoyancy and resilience, as seen in the competitiveness indicators that position the industry among Italy’s domestic excellences. In fact, the ability to penetrate international markets increased, with a 71.5% export share of sales, while sales on the domestic market held at 60.9%, a minimal drop justified by the strong restrictive measures adopted to limit the effects of the pandemic. “Our industry was really put to the test by 2020,” stated GIMAV President, Michele Gusti. “Despite the pandemic that swept in waves across our sector and the ensuing lockdowns and border closures, the manufacturers of Glass Processing Machinery and Technologies acted swiftly to limit their losses, more successfully than their international competitors.”

Flat Glass Processing Technologies were the worst hit by the pandemic with lower revenues, exports and domestic sales for all of 2020, compared to 2019 (except for November sales). Nonetheless, there was better international market penetration and a firmer foothold in the domestic market was established. Overall better results for Hollow Glass Processing Technologies which, in 2020, limited sales losses to -8.9%, thanks to the positive performance of domestic sales (+17.7%). This owes much to the fact that the Hollow Glass Industry could keep working – notwithstanding the restrictions to limit the effects of the pandemic – being part of the supply chain considered strategic to national interests. This helped balance out the 15% drop in exports. The sector improved its own domestic market presence, but experienced a drop in international competitiveness.

The Accessories and Other Glass Processing Technologies sector limited its losses in revenues, exports and domestic sales to 10%. The sector’s international competitiveness remained fairly stable, which improved its foothold in the domestic market.

Analyses by the GIMAV Study Center of the early effects of the global pandemic became available in March, when the Glass Processing Machines and Technologies industry suffered a 2.9% drop in revenue, compared to the previous month, rather than the expected seasonal growth (+29.5% in 2019). The catastrophic effects of the crisis were even more apparent in April when the emergency measures adopted by the authorities on the heels of the so-called “first wave”, brought normal business activities to a standstill, with the resulting crash (compared to April 2019) in exports (-57.3%), domestic sales (-45.6%) and thus, overall revenues (-53.6%).

Thanks in part to the first re-openings, the next two months were marked by a “technology rebound” which began to narrow the gap, until November. That’s when, aside from the “lost ground” of previous months, for the first time in absolute value, revenue outpaced that of 2019. Nonetheless, the arrival of the so-called "second wave" in December curbed the recovery, perhaps concealing the truly positive factor, that is – the ability of the industry’s business fabric to react to and withstand extremely unfavorable circumstances for the domestic economy and, even more, for international trade.

Performance of the Accessories and Other Glass Processing Technologies sector was much the same as that in the first part of the year. In August, however, very similar figures to those of the previous year were recorded and November and December rose higher than in 2019, proof that, in this case, the sector was not affected by the so-called second wave.

From March to August, the Hollow Glass sector was also severely affected by the slump in international demand. Starting in September, exports regained their usual momentum and revenues remained firm at values higher than those of the previous year. Thanks, in part, to the ongoing contribution provided by domestic sales in meeting demand from the food and pharmaceutical industries, the industry also succeeded in riding-out the “second wave” of the pandemic.

By January 2021, the negative December 2020 performance had already subsided, paving the way for recovery in February, thanks to good domestic sales and a partial resurgence in exports, that stabilized in March as exports fully resumed.

Projecting first quarter results to December 2021 ‒ without taking into consideration any changes that could occur by year-end to positively or negatively affect industry businesses ‒ revenues are expected to grow by 4.5%. This is still a modest result, fueled by good performance from the Accessories and Other Glass Processing Technologies industry, by substantial stability in the Flat Glass sector, compared to 2020, and by negative results for Hollow Glass, due to exports that remain stagnant. Bearing in mind, however, that the forecast does not take into account second quarter results ‒ still unavailable, and during which time the international scenario has partially normalized, thanks to the strengthening of the Covid-19 vaccination campaign ‒ and, in fact only includes the results of a period still conditioned by the so-called “second wave”. It can be reasonably assumed, therefore, that the 2021 results could be better than forecast and, given the reduction in infections and the vaccination drive continuing at full speed, they could possibly come close to 2019 levels, as clarified by GIMAV Director Fabrizio Cattaneo: "The data say it all: 2020 was a tough year for everyone, including the Manufacturers of Glass Processing Machinery and Technologies. However, given the encouraging first-quarter figures, our industry can look to 2021 with optimism. Basing our forecast on the little data available, we have predicted moderate growth expectations but we are well aware that a major underestimation is inherent to the method. Nevertheless, taking into account the unprecedented times we are living in and that we have not entirely put behind us, it seemed more judicious to propose an approximate ‘rounded down’ estimate that could possibly be reviewed as things improve in the future, rather than making a more optimistic forecast and then having to adjust it downward.”

The trend toward a definite recovery is also confirmed by the optimism surrounding VITRUM 2021 ‒ the numbers for the next edition are positive. “We said it during the pandemic and we reiterate: VITRUM 2021 will be the industry’s recovery trade show, not only for manufacturers but also for those who use Glass Processing Machinery, with a special focus on end users through the concurrent GLASS WEEK events,” remarked Dino Zandonella Necca, President of VITRUM and of the Glass Processing Accessories and Other Technologies section. “From October 5th to 8th, Milan will be the stage upon which every aspect of glass will be projected and we are working hard to make it a great event for everyone!”

BOARD OF ARBITRATORS AND SOLE AUDITOR APPOINTED 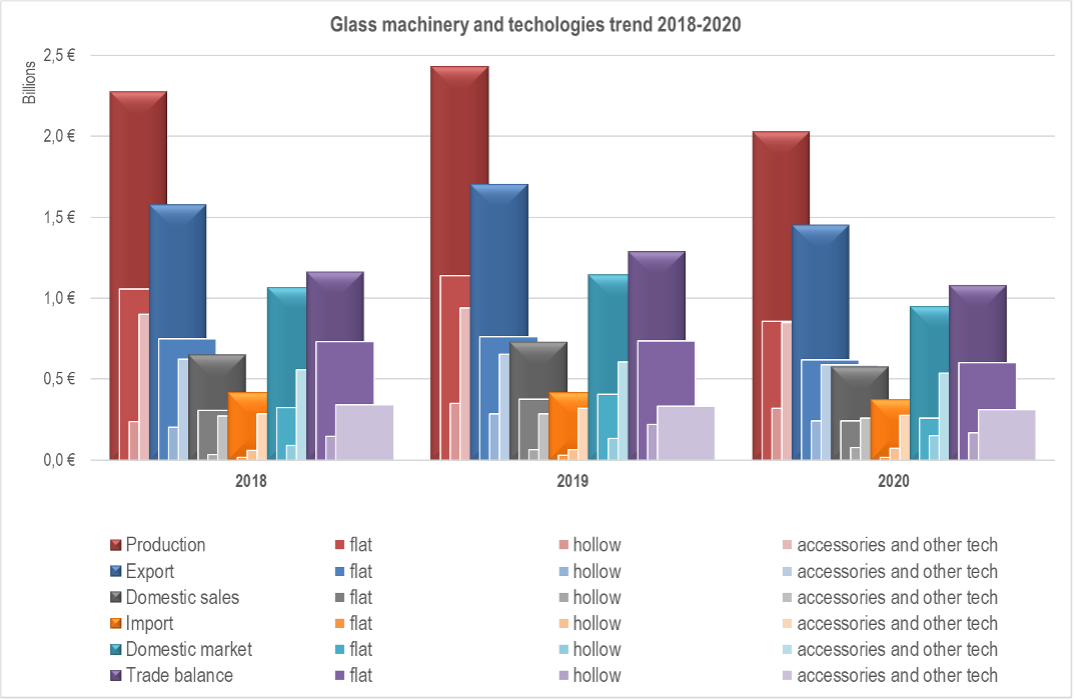 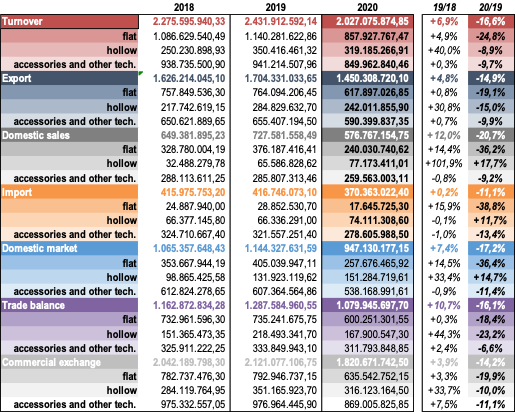 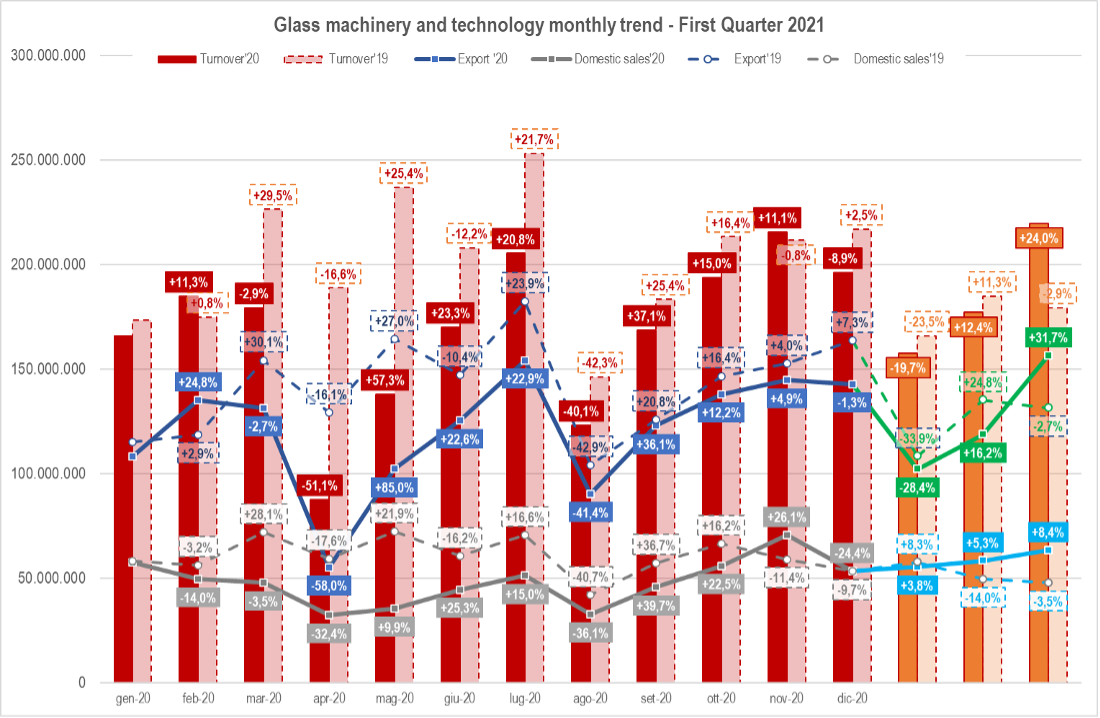